on June 02, 2019
In our last episode of We Both Have Cancer, we were planning on a big surgery to remove the cancer from dad's sinus and brain. Since just about the moment I hit publish on that blog, we found out that surgery is no longer an option. TL;DR Kenny was enrolled to Hospice care yesterday.

The tumor, of course, has been growing rapidly since its discovery in January when they first wanted to operate. Dad wanted to go to Scotland with me and to see Graham in Macbeth, so he delayed operation. The most recent MRI showed the tumor has spread to the other sinuses and is affecting his "good eye.” Getting clear margins would require removing too much of the brain, so at this point there is nothing that doctors can do.

We are just trying keep him out of pain. If you’ve ever had a sinus headache, imagine that pain plus a couple of grapefruits pushing on your eyes and brain. It’s got to be uncomfortable for dad, and we are working on getting him the right pain meds.

I’ll update as I can but for now am doing the thing where I don’t leave him alone for long and am living between two houses. Say hi to my kids for me. 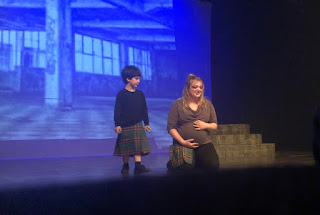 It would be nice to not still own this domain (if anyone out there needs it, let me know and I'll transfer it over eventually), but Dad's had a pretty aggressive recurrence. Doctors still think it may be resectable, so they (and Dad) want to try for a surgery as soon as the doctors can schedule it. Surgery involves the ENT surgeon as well as a brain surgeon, so I guess scheduling is tricky. In the mean time, David and I have called in Palliative Care (which is not  hospice) to help manage dad's pain and have a team that sees him regularly at home because I've not been super pleased with the admin/communication side of his current oncology team. Also, Dad isn't comfortable with me taking care of him (though I clean out his affected eye and change bandages multiple times a day, which I am grateful to be able to do), but I am an anxious mess with him moving up and down the stairs and trying to manage sleep with the restlessness and pain. I'm hoping the palli