Updates on the cancer patients

on August 24, 2018
We all know it's awful, but, ugh, cancer. I'm so thankful for David's hard work in clearing out the dining room a couple of weeks ago. And thank you for the donations. With them we were able to purchase an adjustable bedframe for my parents and a few other home health supplies. The bed works with a queen-sized mattress we already have, but has a remote control and operates like a hospital bed.

Mom was ready for the hospital bed, but my parents do not want to be separated. I feel like, for Dad's recovery time as well, being able to snuggle with Mom is important. And you can't snuggle in a twin hospital bed. So this is our version of a Queen-sized hospital bed. It's allowed her to sleep downstairs, but sit up without great effort when a friend visits. There are plenty of chairs around her bed, so even her Book Club came to sit with her last week.

Today seems a little different. She has been sleeping more than usual in general for the last months, and weeks, but she was difficult to rouse this morning. When the nurse came to check her BP, she was cognizant enough to mumble and remind the nurse to take her blood pressure on her right arm (since her mastectomy in 2000, she can't do BP on the left arm), but then she conked right back out to sleep. It's not medication induced sleep, as far as we can tell; her body is just really, really tired. It's a significant change from yesterday, however, when I sat, snuggled in bed with her for a while talk about music and funeral plans (super morbid, but Patsy is opinionated). The photo above was taken yesterday, but I have not seen her open her eyes yet today.

Dad is really tired too, but he's sharp as can be mentally and is still completely independent. He fussed at me for trying to help, which is 100% on-brand. The side effects from 5 weeks of radiation are catching to him, and he's in a lot of pain in his mouth and throat, making eating a challenge. He's be great about focusing on getting calories and protein, even though I can tell it hurts him. (The man does not want a feeding tube.) But he's particular about what he can/will eat, so even I don't know what to cook for him.

We've had 3 amazing meal deliveries for my own family in the past week, which has been incredible -- thank you. I didn't realize what a stress the grocery/cooking had been on the boys and me, and to have that mental load taken care of was a huge relief. It's also allowed me to keep things a little more normal for Graham and Angus, in that we've had family dinner together rather than me just running over to my parents' house after work.

With Mom's current state, however, the nurse has suggested that she not be left alone. We don't want Mom to try to get out of bed by herself, as that could be messy. I don't want that 24/7 burden on my dad, so I will probably start sleeping over at Mom's tonight.

If you know anyone who does caregiving for a living, please let me know, as I know I will have to hire someone to sit with Mom at some point over the next few days.
home health care Hospice side effects

Kenny has been quiet about how he’s doing because he feels like crap and doesn’t want to bother anyone. He also does not want me “spreading morbid rumors,” which is a direct quote. I am going to share what I know because I keep getting many many many messages and feel guilty that I can’t respond to them individually (i can’t even get it together to go to the grocery, much less get my inbox to zero). I’ll stick to the facts without flourish or drama (I PROMISE, DAD, if you’re reading this). He has a recurrence of the Squamous Cell Carcinoma of the sinus. SCC are technically a skin cancer, but his SCC had nothing to do with sun exposure. Sinus cancers are rare — only about 2000 cases a year — and are caused by environmental exposure to hazardous chemicals. Dad spent many years as a chemist and working with hazardous waste disposal (which i used to think meant “mafia,” but apparently it literally means hazardous waste disposal), so he certainly had exposure to a variety of dangerous c… 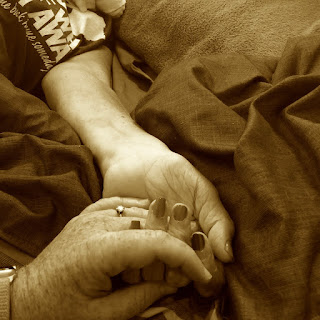 Easter morning, 1983, my mom received a phone call from her brother. "Mom's not breathing."

"What does that mean?"

And then she burst into tears. I was in the dining room, digging through a basket of chocolates, feeling sad for my mommy, but also really enjoying the fact that I was allowed to eat all the chocolates I want. She told me recently about that story again, laughing that "they always tried to protect me, even from horrible news."

Yesterday afternoon, I called my uncle and relayed the same message to him: Mom's not breathing.

Patsy died at 1:07pm on Sunday, September 9, holding hands with my dad (and wearing one of my band t-shirts) in that same dining room where I hid and ate all the chocolate I could in April of 1983.

It was a hard morning as her body fought so hard, not wanting to shut down. Her heart worked overtime and her lungs struggled, and a hospice nurse came to adjust pain medications to help her relax. We adjusted her to help …

In our last episode of We Both Have Cancer, we were planning on a big surgery to remove the cancer from dad's sinus and brain. Since just about the moment I hit publish on that blog, we found out that surgery is no longer an option. TL;DR Kenny was enrolled to Hospice care yesterday.

The tumor, of course, has been growing rapidly since its discovery in January when they first wanted to operate. Dad wanted to go to Scotland with me and to see Graham in Macbeth, so he delayed operation. The most recent MRI showed the tumor has spread to the other sinuses and is affecting his "good eye.” Getting clear margins would require removing too much of the brain, so at this point there is n…